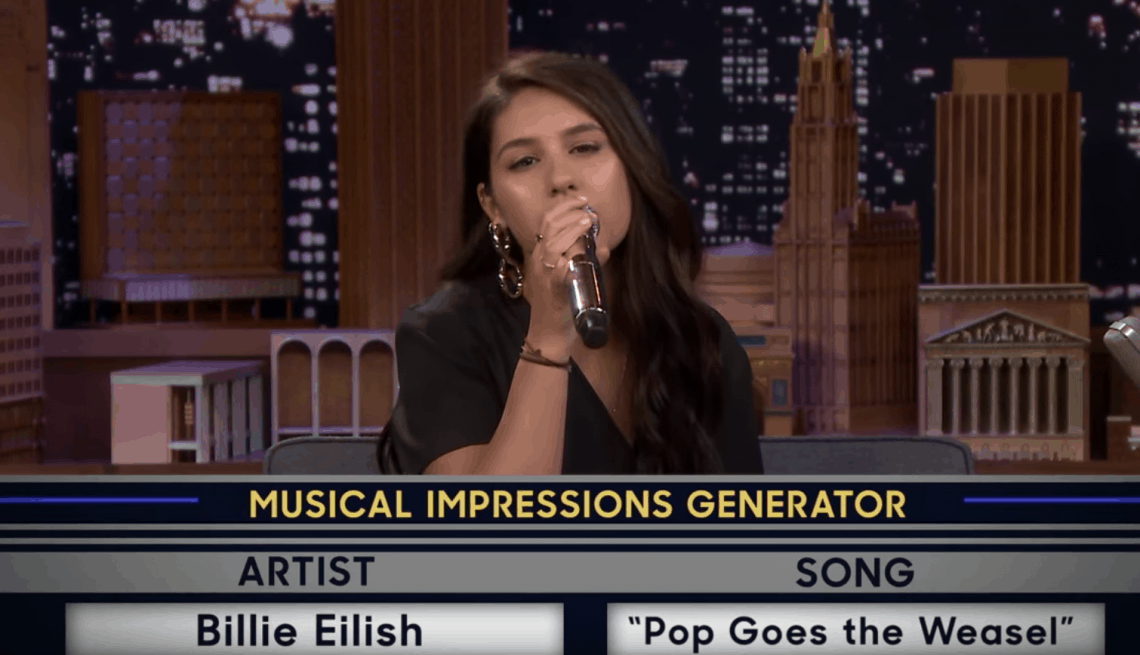 Alessia Cara stopped by The Tonight Show to challenge Jimmy Fallon to a rematch of the show’s segment “Wheel of Musical Impressions.”

The singer, who previously took on the challenge back in 2017, was game to recreate the sounds of musicians like Billie Eilish and Amy Winehouse.

During the clip, the “Musical Impressions Generator” first pops up with Eilish and “Pop Goes the Weasel,” which Alessia Cara nails immediately.

Fallon’s first turn involves The Doors and “Rubber Duckie, You’re the One,” which has slightly less on-the-mark (but very passionate) results.

Cara also impressively tackles Winehouse singing “Old MacDonald Had a Farm” to the tune of “Rehab.” The best moment comes when Fallon is asked to perform “Baby Shark” as Mick Jagger, which should become a real cover that actually happens.

Alessia closes the game out with a dead-on impression of Alanis Morissette doing “Hush, Little Baby.”

Also in the show, the singer also joined Juanes on The Tonight Show stage to perform his track “Querer Mejor,” on which she features.

Cara’s new EP, This Summer, is set to drop on September 6th.

A new song was shared from the release, “Rooting for You,” a bouncy summer romance tune that followed EP single “Ready.”

She is currently opening for Shawn Mendes on the North American leg of his tour, which wraps on September 6th in Toronto.

Fall headlining tour, which kicks off October 21st in Boston and ends in November at Houston’s Revention Center.

Stay up to date with all the Music News.

We also heard Jimmy Fallon is a big Paul Simon fan? Did you read Paul has been playing charity gigs for various environmental organizations.

This last week Paul Simon was in Hawaii. Read the full story HERE.