The 4th Asian Beach Games close with a spectacular ending at the Saphan Hin Sports Center in Phuket on November 23 night, with Tourism and Sports Minister Kobkarn Wattanavrangkul presiding.

The Closing Ceremony featured four fantastic shows with more than 800 performers. The ceremony started with the first performance on Magic of Dream Destination, which reflected the true value of Phuket natural resources, followed by Magic of Memory. The participating athletes and officials from all 43 nations then paraded in together with the flag procession. After that, it came to the Lowering Ceremony of the OCA (Olympic Council of Asia) Flag and the Games Flag, followed by the Flag Handover to next hosts Vietnam, represented by Mr Le Khanh Hai, Vietnamese Deputy Minister of Culture, Sports and Tourism, and Prof Hoang Vinh Giang, Deputy President of the Vietnamese Olympic Committee. The Hoisting Ceremony of the Vietnamese Flag was held moments later, followed by an impressive performance of Vietnam.

The third show on Magic of Impression was performed, followed by the flame extinguishing at the cauldron and the release of the colourful sky lanterns. The Closing Ceremony continued with the Magic of Happiness which reflected an unforgettable impression of participating countries, followed by a spectacular fireworks display.

Nevertheless, the highlight of the Closing Ceremony was the release of turtles to the sea, a tradition of Phuket residents and those at the Andaman coast, urging all participating countries to realize the natural preservation and the cordial hospitality of the Phuket residents.

Vietnam will host the 5th Asian Beach Games between September 24 and October 3, 2016. 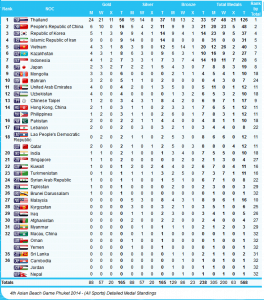