What do you get if you put Andy Henly – Bryan Adams and Ed Sheeran together?

This weeks edition of Big Ones and New Ones.

Also, Big Ones and New Ones feature 5 songs and events from November of a mystery year from the 80’s. Try and work out the year from the clues and music and play The Test of Time.

This week Hour one.

It all kicks off every Saturday at noon with a start from Survivor and Eye of the Tiger. Followed by Jessie J and Price Tag and then some Poison from non other than Alice Cooper.

Beth Ditto, Savoir Fayer and the Bangles, Going down to Liverpool with Charlie Puth asking us How Long.

Completing this segment is Duffy with Mercy.

The final part of the first hour has The Police asking us about a Message in a bottle. While Father John Misty offers us some Pure Comedy.

Wrapping up as we go to the BBC news in London is Train, Drink Up and then nothing better than Queen with Radio GaGa.

Hour 2 of Big Ones and New Ones kicks off with THE TEST OF TIME. November and a mystery year from the 1980’s.

Try and work out the year from the clues and music and play The Test of Time.

Showaddywaddy, Under the moon of love, Abba, Money Money Money, Sherbert, Howzat and Real Thing, Can’t get by without you.

Wrapping up The Test of Time Chicago, If you leave me now, Did you work it out?

Big Ones continues with Leading Ladies, One Night Only, Reo Speedwagon, Can’t Fight This Feeling and Men at Work, Down Under.

Having just celebrated his 58th Birthday on Sunday Adams is still going forward and as popular as ever. This week we feature Please Stay and that old favourite Summer of 69.

Bryan is set to tour Australia in January! Bryan performs Bribie Island, Gold Coast and two A DAY ON THE GREEN shows in Victoria. Full details on his website HERE.

Moving on to the final parts of this week’s show please welcome some Madness singing Mr Apples, Youssou and Neneh Cherry, 7 Seconds. 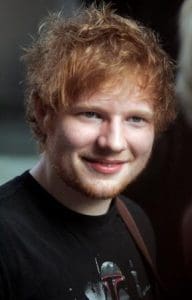 Ed Sheeran will start his Asia tour this weekend on the 11 Nov 2017 in Singapore. With tour dates in Singapore, Kuala Lumpur, Bangkok, Mumbai and Dubai. Moving onto New Zealand in early 2018.

NZ Herald reports that Ed is planning a tour of New Zealand in 2018. He says:

Sheeran is playing six stadium shows in March and April, with three each at Auckland’s Mt Smart Stadium and Dunedin’s Forsyth Barr Stadium.

Into the final song of this weeks show and it’s The Waterboys with The Whole of the Moon.

You can catch Big Ones and New Ones every Saturday on Phuket FM radio 91.5 and 102 5FM and if your outside Phuket listen online.