Available statistics point to a rise in audience and a consequent growth in revenues of in internet radio stations across the world.

One study indicates that global online revenue in 2013 was $827 million with the reach in the US being about 85% weekly.

Another study shows that one in three Americans age 12 and older or an estimated 86 million people listen to online radio on a weekly basis.

The charts below give an idea of the level of internet radio penetration in the US. 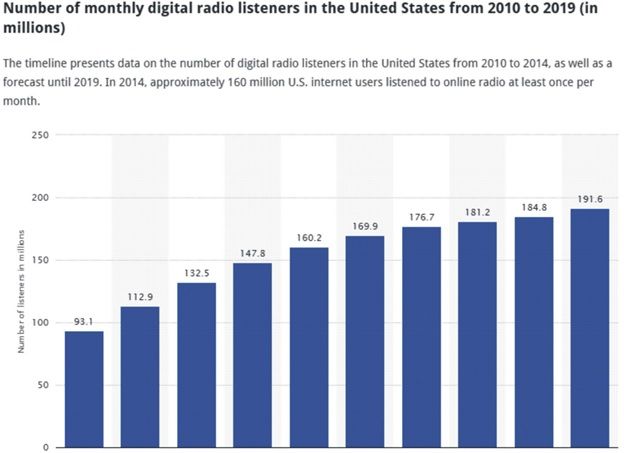 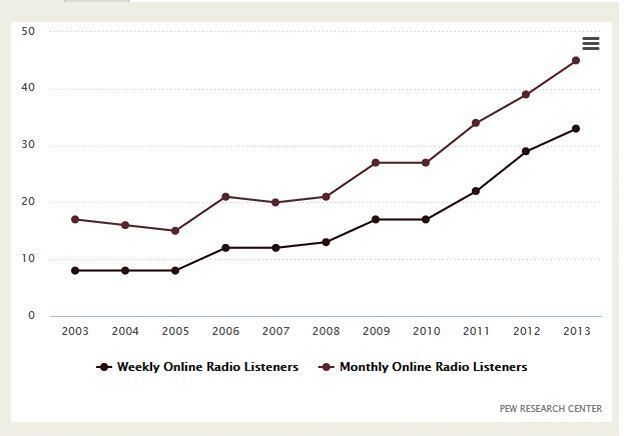 Perhaps the greatest force driving this trend is peopleâ€™s love for music.

For one, a vast majority of content streamed on Youtube, is music. Also noteworthy is the rapidly increasing popularity and use of internet radio apps like Pandora. iHeart radio and Spotify.

On the continent of Asia, Phuket Island Radio has witnessed a meteoric rise in its traffic volume over the past few years and is the go to station for most music lovers in Phuket.

Compared to other forms of entertainment, listening to music on the radio does not distract from other on-going activities.

So, one could jolly well listen to music while driving, exercising, eating or performing any other task. 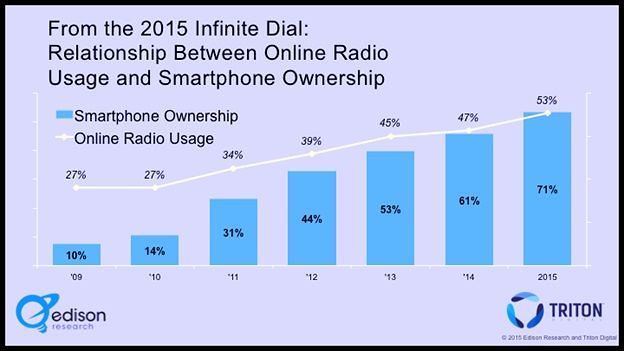 The revenue and Internet Radio Potential for onÂ internet radio are huge when one considers the following factors:-

â€¢ It has been projected that by 2017, 3.5 Billion people, more than half of the worldâ€™s population will have access to the internet. If we consider the fact that a large chunk of this figure would be driven by smart phones and given that the average person is awake for approximately 17 hours every day, we could project a total listening hours of 59.5 billion per day globally. If we are to use Pandoraâ€™s 2014 average revenue per thousand hours of $42.77 as a benchmark, the approximately daily revenue globally would be $2.5 billion, assuming an equal market rate worldwide.

â€¢ There has been a consistent correlation in the relationship between the growth in smart phone usage and online radio usage in the US as seen in the chart below. This will definitely ne the trend globally over time as the level of internet penetration and usage increases.

â€¢ The availability of user data and the tools with which to analyze them has made it easier to understand user behavior. This allows the possibility of tailoring content to meet usersâ€™ preferences and needs. What this means is that, in the future, it would be possible for a listener to personalize his listening experience to match whatever activity he is engaged in at any given time. So, he can have different music playing for waking up, jogging, traveling to work, during lunch and so on.

â€¢ Advancement in technology has helped to reduce streaming costs as well as the cost of data collection and storage thereby making internet radio ownership cheaper and more profitable.

â€¢ An increasing number of record labels are already taking advantage of the trend by allowing on-demand access to their music libraries.

The sheer number of potential listeners and the possibility of incorporating user demographics into internet radio will mean a boom for advertisers.

The task of reaching their target customers becomes easier and more accurate thereby maximizing theÂ Internet Radio Potential by using Mobile apps that work on anything with an “I” in it, Google Play and Android systems and other radio portals such as Tunein and Streema.

Phuket Island Radio is completely focused on these opportunities.