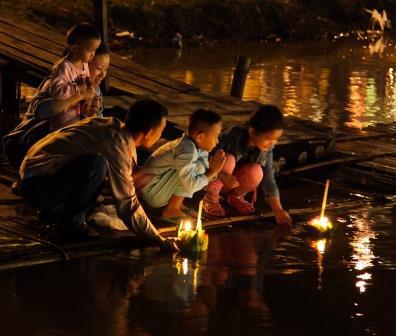 Loy Krathong this year is on the 31st October, which coincides with Halloween.

If you’ll be in Thailand this November there’s one festival you shouldn’t miss. Loy Krathong  – the festival of lights – is held every year in Thailand, along with parts of Laos and Myanmar. Next to the new year festival of Song Kran, it’s one of the most well-known Thai festivals. It’s much more relaxed and slow-paced then Song Kran, making Loy Krathong a more spiritual and serene event.

What is Loy Krathong?

The meaning of the word ‘Loy’ is to float and ‘Krathing’ is a term referring to a banana trunk decorated with flowers, banana leaves, candles and incense sticks. 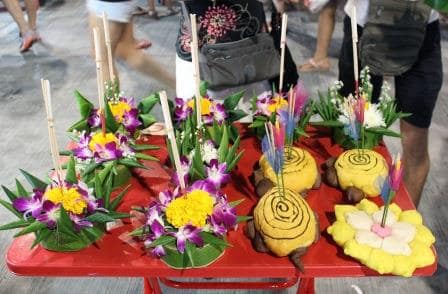 How the festival originated is a matter of some debate. According to one legend Nang Nopamas, the consort of King Ramkhamhaeng, made the first offering in honour of ‘Mae Nam’. She placed the offering in a canal which floated past the king she loved. To this day, it’s believed that a love affair will last forever when you make an offering to the water God. Thais also believe it’s a time to wish goodbye to misfortune and wash away the sins of the past year.

When is Loy Krathong held?

Celebrated annually, Loy Krathong falls on the evening of the full moon of the 12th month in the Thai Lunar calendar. For the western calendar, this usually falls sometime in November. For 2020 it is October 31st. The exact date is announced a month before the festival.

Remember these are approximate dates so make sure to check before you arrive.

What are the best places for Loy Krathong?

Although it’s not an official holiday it’s still considered one of the most romantic and spiritual times of the year. You can find it anywhere across Thailand that has water. For the best experience though there are a few places that hold the festival on a much bigger scale.

Held along the banks of the Chao Phraya river and the city’s waterways, Bangkok is a great destination for the festival. The city has many ponds and waterways available in parks where friends, families and lovers can release their Krathongs. If you’d like to celebrate in a restaurant with its own in-door pool be sure to book well in advance.

Celebrated along all the main beaches, Sapan Lake, Karon lake and everywhere else with water, Phuket is another great location. You’ll find the biggest crowds on Patong Beach and Nai Harn Lake Expect to find plenty of food and fun fairs in popular spots all around the island.

Believed to be the place where the festival originated, Sukhothai is in central Thailand and considered one of the best places to experience the festival. Here the festival goes on for five days and includes plenty of culture in the old city. Along with floating lights, here you’ll see beauty contests, parades and folk music performances. This is a very popular spot so make sure to book hotels well ahead of time.

Culture and food capital of northern Thailand, Chang Mai also hosts the lantern festival of Yi Peng at the same time as Loy Krathong. The celebrations go on for almost a week with most roads closed because of all the crowds and food stalls. You can enjoy culture and contests all week with the ‘Miss Nopamas’ beauty contest title being the most coveted. The festival kicks off with a huge procession that starts from Tapae Gate and ends at the river bank. Like the others, Chang Mai is a hugely popular destination so book in advance

Mark this one on your calendar and if possible try and make it to one of the top locations because this is one festival you should not miss.