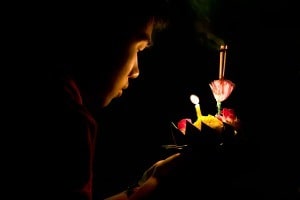 Loi Krathong 2015 takes place on the 25th of November.

One of Thailand’s most celebrated holidays, Loi Krathong 2015 presents the opportunity to pray to the water spirits in the hopes of letting past transgressions and negative thoughts float away.

Loi Krathong 2015 is widely celebrated across the island of Phuket.

It is a night of fantastic beauty, as gorgeous lanterns light up the sky and handmade floating Krathong, which are in essence floating baskets, decorated with colorful flowers and candles flood the waterways. Phuket’s beach destinations provide the perfect spot for taking part in Loi Krathong.

Loi Krathong 2015 traditionally takes place during the night of the full moon in the 12th month of the Thai lunar calendar.

On the night of the full moon, both Thais and foreigners alike can be seen launching elaborately decorated Krathongs in the ocean, in rivers, lakes, and canals.

It is tradition to make a wish before launching the Krathong.

Thailand hosts festivals throughout the Kingdom and across Phuket Island where Loi Krathong 2015 and where beauty pageants are held, fireworks and lanterns set off and families and tourists mingle in a carnival-like atmosphere.

In Phuket, mini-carnivals are set up at all beach destinations, with Patong, Karon, and Kata beaches being popular with tourists, and the shaded waterway of Saphan Hin in Phuket town is popular with locals.

Loi Krathong 2015 offers the chance to experience a beautiful Thai festival deep-rooted in history. The festival originated from an ancient ritual where Thais paid respect to the water spirits.

Thai people use the Krathong to express their thanks to the Goddess of Water, Phrae Mae Khongkha.

The Krathong, which are the main attraction of the festival, are made of banana stalk, bread, and sometimes even Styrofoam.

They are decorated with intricately folded banana leaves, candles, and incense sticks. Sometimes a small coin or a clipping of a fingernail is also nestled into the Krathong.

Corporations, various organizations, and all government agencies celebrate the holiday by launching large, decorated Krathongs and many local Thais spend the day making Krathongs to sell.

Oftentimes, there is a prize for the most beautiful or best Krathong during the mini-carnivals held around the island.

Loi Krathong is one of the most picturesque festivals throughout the entire country. Many resorts and hotels will be arranging their own Kratong festival for guests and visitors.

As lanterns light up the sky and Krathongs float through waterways, the night is reflected in the light.

It is fitting that Loi Krathong 2015 will be known as the festival of lights. For more information on where to be and at what times Tune in to Phuket Island Radio and the Breakfast Show with Ryk Orion and also the full events schedule and updates if you are outside Phuket.