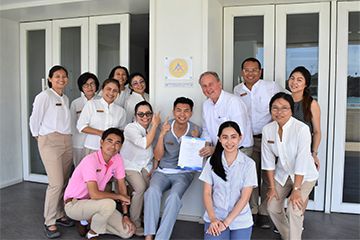 Phuket FM Radio is delighted to learn of the Mice award winner The Nai Harn Phuket. Recognition by the Thailand Convention and Exhibition Bureau (TCEB).

Outstanding services in providing meeting rooms of the highest standard.

said TCEB and our congratulations go out the General Manager Frank Grassmann and his team.

What does a Mice Award mean?

The TCEB has awarded The Nai Harn Phuket resort with full Thailand MICE Venue Standard (TMVS) accreditation.
Since its re-launch just over 3 years ago, The Nai Harn has continued to grow its reputation as a first-class MICE venue along the southern tip of the island. Its two meeting rooms Promthep 1 and Promthep 2 were now certified for a period lasting until 2021

The two meeting rooms can accommodate up to 96 guests and 32 respectively. With 85 sqm and 45 sqm both rooms feature daylight with exceptional views over Nai Harn Bay and Promthep Cape, they are perfect for executive meetings, but also for product launches and even converted into a discotheque for weddings.

Frank Grassmann, General Manager of The Nai Harn Phuket, commented, “This award represents a great deal of effort from all departments of our resort, and another step to promoting our iconic resort as a preferred MICE destination in the beautiful south of Phuket.”

“To have both meeting rooms certified by the official government body is a great achievement for the resort, and for myself, looking after all events at the resort,” said the resort’s Events Coordinator, Khun Thanyathon Limamornrat, who has been instrumental in spearheading this project and who received the award recently in Bangkok on behalf of the resort.

Another event The Nai Harn excels at is the James Suckling Great Wines of Italy.

James is currently the wine editor for Asia Tatler and its nine luxury magazines in the region, including Hong
Kong Tatler, China Tatler, Singapore Tatler, and Thailand Tatler.

Finally, do not forget The Great Nai Harn Sunday Brunch.