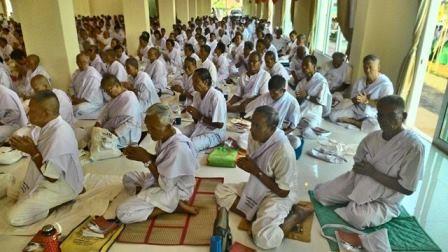 This year Visakha Bucha Day is on the 6th of May.

This day is the most important Buddhist holiday and celebrated by Buddhists all over the world. Visakha Bucha is also publicly recognized as a national holiday in countries with a large number of Buddhist inhabitants.

Wednesday is a National Holiday

Tourists should understand that this day is one of the most important days in Buddhism. This is because of 3 important incidents in the life of the Buddha, the birth, the enlightenment, and the passing away.  All falling in the same month and date, the Vesak full moon day.

So, the 6th May, Visakha Bucha Day is a holiday traditionally observed by Buddhists and some Hindus and on different days in Myanmar, Mongolia, India, Sri Lanka,  Thailand, Cambodia, Laos, Nepal, Tibet, Bangladesh, Bhutan, Indonesia, Singapore, Malaysia, and the Philippines.

Along with and in South Korea, North Korea, Taiwan, China, Japan, and Vietnam as “Buddha’s Birthday” as well as in other parts of the world. To see a full list of countries and dates visit the link HERE

Buddhist Visakha Bucha day event in Thailand and around the world is divided into 3 Ceremonies, Royal Ceremony (Royal Ceremony), people’s ceremony) and monks by the morning of Buddhist Visakha Bucha day. The people will join to make merit, offer food to monks, listen to dharma in the afternoon and go to the temple, walk around ubosot to remember the grace of the wisdom and the Holy Spirit of the Buddha. To Buddhism

But due to this year, there is an outbreak of covid-19, the Visakha Bucha ceremony of the palace and government will be held within the people. The people have advice from maha sama. No event “walking around the temple” at the temple and recommend to practice the devil. The Mission is ready for monks at home instead of both Thai and foreign temples.

The sale of alcohol becomes prohibited during the Visakha Bucha Day and thus many bars close temporarily. Most celebrations are private and of religious background.

Tourists can visit a few of the many temples that become even more alive than normally during Visakha Bucha Day. Appropriate dress code is a good idea, long sleeves long trousers, no T-Shirts and maybe a headscarf for the ladies. Check out the weather and also the local Phuket temples for a timetable of the day’s events.