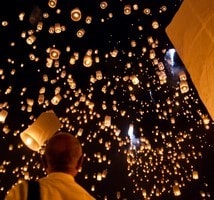 Loi Krathong in Phuket, or the ‘festival of lights’ follows on from the array of colorful festivals in Phuket and all around Thailand. If you didn’t get enough of the festivities of the Phuket Vegetarian Festival in October, your day just got better. Loi Krathong comes to our paradise island on the 15th of November 2016.

Loi Krathong or the ‘Festival of Lights’ is celebrated right across Thailand. The date each year is set to the 12th lunar month in the traditional Thai calendar, which generally falls in November.

The most popular event of this colourful, national festival is the launching of the Krathong. The Thai word ‘Krathong’ can be translated to mean ‘a decorated floating basket’. With the Thai word ‘Loi’ meaning to ‘float’, Loi Krathong could be called the ‘floating basket’ festival.

Traditionally, a Krathong is made from the trunk of a banana tree and leaves, modern versions can be made from bread or styrofoam. The basket is then beautifully decorated with banana leaves, incense sticks, and candles. The Krathong resembles the lotus flower and is an essential part of promoting good fortune during the festival.

Loi Krathong in Phuket is a must see event if you’re in Thailand in November. Whether you believe the river spirits will grant your prayers or not, the sight of the festival is one to behold.

If the Krathong floats away from you, the coming year will bring good fortune. If it floats back towards the shore, then it may not be what you wished, as is believed.

You can purchase a ready-made Krathong of shops and stalls around the island in the hours before sunset. Or make your own special Krathong to float. As the full moon starts to rise, join the thousands of people along the water, sending the Krathong’s and wishes to the River Gods.

Find out what the Phuket Weather will be doing when you visit.

There’s so much to see and do in Phuket, take a look at more Phuket People, Places and What to do.