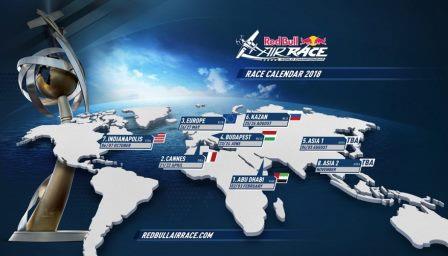 “The 2017 title went down to the wire, keeping the world in suspense up until the final run of the final race, and now the teams are using the off-season to make their raceplanes even faster,”

“The best pilots in the world just keep getting better, and the destinations that will welcome them next year are spectacular. I can’t predict who will win the 2018 season, but I guarantee it’ll be one to watch.”

This is indeed exciting times in the International Sports Arena and Phuket Island radio will be bringing you all the results and latest news updates.

The 2018 World Championship campaign a season opener in Abu Dhabi, UAE. The next stop will be Cannes with French pilots in both the Master Class and the Challenger Class on 21-22 April the first time the event has visited France. Another first for France will be the first woman to compete in the series. Please welcome Mélanie Astles to the 2018 Red Bull Air Race.

Meanwhile, the Rugby Union fans at the radio station are jumping up and down to learn about the new naming rights partner for the Six Nations.

For the uninitiated. The Six Nations Championship now known as the NatWest 6 Nations is an annual international rugby union competition. It takes place in the Nothern Hemisphere between the teams of England, France, Ireland, Italy, Scotland and Wales. The current champions are England, having won the 2017 tournament.

““We are delighted to be announcing NatWest as title sponsor of the NatWest 6 Nations and the extension of our relationship with RBS.

Furthermore, you can download the 2018 Six Nations Calendar straight to your mobile device HERE. Speaking of Mobile apps you can download Phuket Island Radio right HERE. Take 91.5 and 102.5FM with you wherever you go and follow us on social, Twitter and Facebook.

Finally, our congratulations go out to Laguna Phuket. Again at the same event as the Red Bull Air Race winners and the Tourism Authority of Thailand “Amazing Thailand” won Bronze for “Best Sports Tourism Destination of the Year” while “Laguna Phuket Marathon” wins Gold for “Best Amateur Sports Event in Thailand”.

You can see many pictures of the Laguna Phuket Marathon and Triathlons including Ironman 70.3 events in our picture galleries HERE.