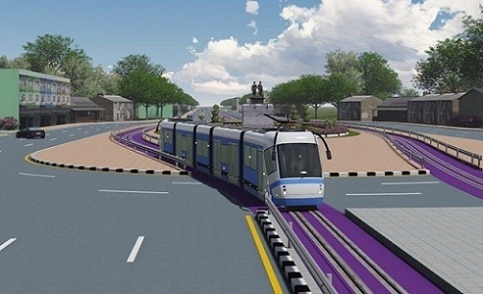 Phuket Tram Service gets go ahead as the governor confirmed that the resort island of Phuket will get a light rail tram service in 2021. Speaking during a brief update on the 60-kilometre 23.5 billion baht light rail tram project on Saturday.

At the briefing and update, Phuket Governor Chokchai Detamornthan said:-

“Construction will start next year and finish in 2020. The tram service will be officially launched in 2021,  the Phuket Tram line will help support Phuket’s economy as it will make travel more convenient for commuters and tourists while easing traffic congestion”, Mr Chokchai said.

Is a Phuket Tram service a good for Phuket?

Phuket Island Radio is inviting its listeners to comment, in a non-derogatory way as to what they feel are the benefits of such a scheme. All comments will be monitored so please keep it constructive.

The Bangkok Post reported that the Phuket governor also urged the public to attend and share opinions at two meetings that are planned on the Phuket tram project that will be held by the OTP on Feb 6-7.

The Feb 6 meeting will be held at Thalang District Office and the other at Tambon Wichit Municipality in Muang district.

Other infrastructure projects to ease congestion include the tunnels at Dara Samut and Sam Kong intersections which are completed and officially opened while construction at Bang Khu intersection is 70% complete.

The tunnel at the Chalong intersection is expected to be finished this September ( we think that maybe 2018) and the one at the airport in 2019.

Further reporting on this story is here.

You can join Ryk Orion on the Breakfast show this week from 7:00 each morning as he shares your comments and views, and don’t forget you can get in touch a number of ways, Line or Twitter at Phuketradio and SMS/text to 09 9000 4040, GET IN TOUCH tell us what you think.