Transitions with John Digweed on Phuket FM Radio 91.5 and 102.5 FM throughout the Island and online via mobile and tablet apps, GET INVOLVED. 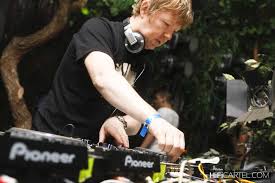 John Digweed is an English Actor, Record Producer, DJ and Radio Personality. His career as a DJ began at the tender age of 15 in his hometown of Hastings, famous for a series of successful raves on Hastings Pier where artists such as The Prodigy and Carl Cox performed.

As you may of expected, Digweed rose to fame in 1993 when famous DJ Sasha heard his demo. The two DJ’s hit it off, striking up a long-term friendship and working relationship that has lasted through the years. The partnership of John Digweed and Sasha is known for progressive house music and for the 1994 mix compilation Renaissance: The Mix Collection, which was the first commercial compilation produced for a nightclub. Sasha and John followed up the Renaissance compilation with various other compilations including Global Underground and Northern Exposure.

Digweed moved on to start the record label Bedrock Records with his close friend, Nick Muir. The Bedrock label gained acclaim when their first track was used in the 1996 British comedy Trainspotting.

Legendary for adopting tracks with new and different styles, Digweed promoted his trademark Bedrock sound from 2000 – 2005 with monthly club nights that also generated interest from newcomers to the electronic music scene.

In 2001, he was voted World No 1 DJ by DJ Magazine, an electronic dance music magazine.

John Digweed is a legend

Digweed, a legendary DJ, and has enjoyed a long career filled with popularity in both Europe and the United States. John Digweed and Sasha took up residency at the famous New York club Twilo, which was a key location for establishing the American electronic music scene.

John Digweed and Sasha began their Twilo residency in 1996, and by the time Twilo closed its doors in 2001, it had become one of the most popular club nights in New York City.

From September 2000 until January 2011, John Digweed’s Transitions became the most popular house music radio show. A weekly two hour radio show was a massive hit; Digweed would play for the first hour, and a guest DJ would play the second hour.

John Digweed’s Transitions originally aired on Kiss 100 in the UK, and by 2006, was available on all 3 Kiss radio stations. Transitions aired for the last time on Kiss 100 in January 2011. The radio show continues to be broadcast online.

John Digweed Transitions is proudly presented every Tuesday evening from 10pm – midnight on Phuket Island Radio 91.5 and 102.5 FM. Phuket people can tune in on their FM radio, online or via our Android and iPhone apps.

Digweed is just one of the fantastic presenters we’re proud to have at Phuket Island Radio, see them all here. Or find out more about our range of shows that’s sure to have something for everyone. Sarah H ardy UK