Armin van Buuren with A State of Trance Thursday at 10pm. 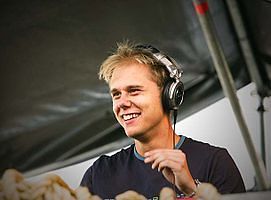 He’s here every Thursday with A State of Trance from 10pm, two hours of the best Dance and Electronic Music.

Van Buuren rose to fame with his A State of Trance weekly radio show, a show which has sparked an interest in trance music all around the world.

Armin has had an illustrious career decorated with a variety of accolades and awards. AVB was the first ever trance artist in the history of Dutch music to enter the Dutch album chart at No. 1, thanks to his 2008 studio album Imagine. In the United States, Armin holds the Billboard Dance/Electronic Albums chart record for most entries.

In 2014, Armin van Buuren was nominated for Best Dance Recording at the prestigious Grammy Awards for his single featuring Trevor Guthrie “This Is What It Feels Like.” This nomination made Armin van Buuren the fourth trance artist in history ever to receive a Grammy nod.

Armin is a favourite at DJ Magazine, where he has been voted the World No. 1 DJ in their annual Top 100 DJ’s fan poll an astonishing five times, four years in a row.

He has been making music since he was a 14 year old boy drawing his inspiration from French electronic music composer Jean Michael Jarre. Armin van Buuren’s first major breakthrough came in 1995 with a Eurodance track titled “Blue Fear” which made it onto the UK Chart when he was 19 years old. Armin’s next successful track titled “Communication” became a summer blockbuster hit in Ibiza in 1999, and broke into the UK Chart at No. 18 in 2000.

Over the years, A van B has been a staple on the trance music scene, but in 2000 Armin really skyrocketed to fame with his own Armin van Buuren compilation series, the first of which sold 10,000 copies.

Recent years have been good. In 2012, he was announced the world’s number one DJ for the fifth consecutive year in a row according to DJ Mag. Armin released his 5th album in 2013, and also in April of the same year, he was the headline act in a live performance celebrating the crowning of the King in Amsterdam. He attended the Grammy Awards in January 2014, and in October 2015 released his sixth studio album, Embrace.

Armin van Buuren brings his wildly popular A State of Trance weekly radio show to 91.5 & 102.5 FM Phuket Island Radio every Thursday from 22:00 – midnight. Be prepared to be blown away by the talent that is the legendary Armin van Buuren.

See more about our international DJ presenters here, all on Phuket Island Radio in our Phuket paradise or anywhere in the world online.