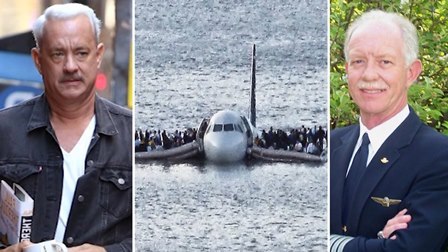 In an update today from Variety “Sully,” featuring Tom Hanks as Capt. Chesley “Sully” Sullenberger,  about the so-called “Miracle in the Hudson” and directed by Clint Eastwood for Warner Bros.

There is more on this drama emergency plane landing movie below.Tom Hanks does it again.

The successful release of what looks likely to be another winner for Tom as ‘Sully’netted $12.2 million on Friday night at 3,525 locations. It is hopeful the weekend will see it taking around $35 million.

Considering Friday night’s dominant total when combined with Thursday night previews that we believe added up to $1.4 million after it was originally thought would be in the region of $25 million, so expectations are being exceeded.

Who doesn’t I hear you say, so what’s your favourite movie, Apollo 13, Saving Private Ryan, Forrest Gump, go on have a think about it.

Tom Eyes High Seas Return With ‘Greyhound’ Deadline EXCLUSIVE: The opening numbers for the Clint Eastwood-directed Sully shows once again that audiences like Hanks behind the wheel of most any passenger vehicle, whether it’s a jetline … Read more …

If you’re like us all here at Phuket Island radio you love the work Tom creates. Having become one of the biggest Hollywood box offer draws, once again evidenced this week end with the release of Captain Scully.

We wish Tom continued success and must get over to the cinema to see Captain Scully.