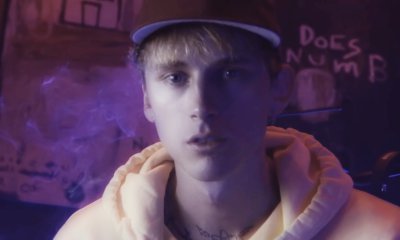 The 27-year-old rapper has released an emotional version of the song as a tribute to the late singer, who committed suicide last week.

Machine Gun Kelly is heartbroken by his best friend Chester Bennington‘s death. To honor the Linkin Park frontman, MGK has covered the rock band’s classic song, “Numb”. The rapper, who usually spits fiery bars, shows off his vulnerable side when belting out the track.

He turns the originally loud song into a more somber and heartfelt version. The Cleveland spitter showcases his clear voice-over piano-infused instrumental. His emotion is visible as he rhymes, “I’ve become so numb, I can’t feel you there/ Become so tired, so much more aware/ I’m becoming this, all I want to do/ Is be more like me and be less like you.”

Upon hearing the tragic news of Chester’s suicide last week, MGK tweeted, “I’ve accepted a lot of things, but this one is too much…not Chester. Not like this. I love you, Chester. I love you more than you know. Music will never be the same without you… I’m honored to have shared these moments.”

the news can’t be true. ive accepted a lot of things, but this one is too much…not Chester. not like this.

love you Chester. love you more than you know. music will never be the same without u…I’m honored to have shared these moments. 💔 pic.twitter.com/2YCtszgwXG

For the last few months, MGK was supporting Linkin Park on their “One More Light” tour. However, the tour was canceled in the wake of Chester’s shocking death. Earlier this week, Linkin Park issued a statement regarding their late lead singer. “Our love for making and performing music is inextinguishable,” they wrote. “While we don’t know what path our future may take, we know that each of our lives was made better by you. Thank you for that gift. We love you, and miss you so much.”

Find out more about how Phuket Island is doing