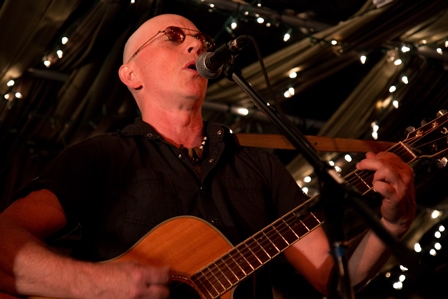 Allen Bell hosts New Music and this week one of his guests is Michael Menegon.

I am originally from Montreal, Quebec, Canada, but now I live in Toronto, Ontario. I play the percussion for contemporary dance classes, I direct and play in a music, dance and video group called ‘Sound of Movement’, I play live with my band ‘Twentythousandays’ and I co-own an organic chocolate shop called COCO Crafted Organic Chocolates.

2009 marked the end of a 20-year career directing arts festivals and touring my dance work. During that time the desire to become a songwriter and full time musician germinated inside me until the right time came along. Two years in the basement experimenting with the craft drove everyone I knew crazy, but I combined my interest in writing with my guitar and rhythmic background enough to get hooked and I haven’t looked back.

Michael Menegon creative process, how do you create music, where do you do so?

I have learned over the years that creativity comes to you and you have to learn to be open to it. My process is freedom from preconceived ideas. Generally, an interesting phrase or melody will come to me while walking or all of a sudden I’ll get the urge to pick my guitar and play whatever comes to me.

Occasionally something comes to me that connects with a feeling or tickles my ear and I’ll develop and play around with it. This happens enough that I’ll start connecting other ideas and after some time the full song is developed. Then when I have enough ideas I go into the studio and voila!

If you had the chance to collaborate with any artist in the world who would it be and why? Stevie Wonder. An incredibly talented artist who is not only a prolific song writer but also a great presence on stage. What couldn’t one learn from a master like him?

The song that took one take to record was “You’re My Religion”. It is a song dedicated to my wife of 28 years. When I played it in venues around the city the response from people I didn’t know was the strongest. However, since the album was released “Tell Me” (written as my response to the death of Sammy Yatim), a song I had not played live before, now garners just as strong a response. Both are very emotional for me to sing.

However, since the album was released “Tell Me” (written as my response to the death of Sammy Yatim), a song I had not played live before, now garners just as strong a response. Both are very emotional for me to sing.

For more information Michael Menegon is on Facebook HERE

Join Allen Bell each and every Sunday when he hosts his New Music Show from 10 PM. Don’t worry if you’re not in Phuket you can tune in online, and download our free mobile apps.