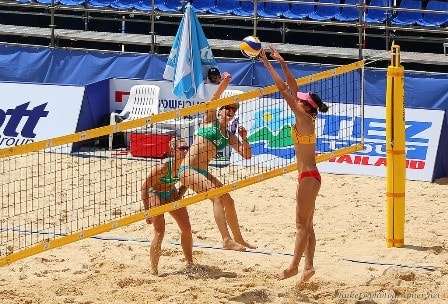 Phuket Sport news, what’s going on in the region.

Sports event promotion is the ‘buzz’ in Phuket at the moment.

With many International events on the 2016 calendar including the recent (July) Cape Panwa Hotel Phuket Raceweek and the Laguna International Marathon in June.

It is hoped that the Ladies FIVB Beach Volleyball competition (head picture) will return to Phuket in the future. A lack of quality location, the right sand and the need for sponsorship are all hurdles to overcome.

Phuket GazetteOpinion: Promoting sporting events in Phuket: Sirawee Waloh, originally a native of Pattani, was appointed as the new director of the Ministry of Tourism and Sports Phuket Office (MOTS) on July 25, 2016. She had prev … Read more …

There’s plenty going on in Phuket. Two Triathlons at the end of November, and a superyacht rendezvous or two.

Turning to boxing and in particular Thai Boxing there are many International visitors coming to Phuket to learn to Thai box. They stay and train for weeks with some going on to major events. One such person is Joe Le Maire from Ipswich in the United Kingdom.

Ipswich Star A Fighter’s Life – Joe Le Maire’s diary from ThailandIpswich Star… is one of the best young Thai Boxers in England. For the next year, he’ll be living and fighting in Thailand, the home of the sport, and every month he’ll be writing a d …read more …

Phuket Sport news has you covered.

Phuket Sport News cover all the local sports and sailing along with other water based sports is a passion for us at Phuket Island radio. We firmly believe that Phuket is a perfect water sports destination.

Recently a group of young sailors from the Phuket Youth Sailing Club (PYSC) travelled to Ballyholme in Northern Ireland to compete in the 2016 Topper World Championships. They won gold and bronze medals and our congratulations go out to them.