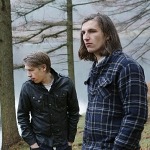 Top of the Pops is LIVE on a Saturday at Phuket Island Radio and this week features in the UK album charts The Young Fathers.

The Young Fathers were christened in 2008, named so because all three have their fathers’ names.

The group consists of â€˜Gâ€™ Hastings, from Drylaw, Edinburgh, Alloysious Massaquoi, originally from Liberia viaGhana, and Kayus Bankole, born in Edinburgh to Nigerian parents, but partially raised in Maryland in the USA, all 27 years old. Their live shows are complimented by Steven Morrison (drums & DJ) and occasional guest vocalist Lauren Holt (AKA LAWholt). source wikipedia.

Top of the Pops is a full show packed with music all the way as we showcase all the high new entries and climbers in the latest UK album charts and the lates singles.

We have music from the brand new UK albums by The Young Fathers, the legendary Brian Wilson, The Script, American rockers All Time Low and duo Drenge.

Drenge are an English two-piece grunge / post grunge band based in Castleton in Derbyshire.

The band is made up of Eoin Loveless, on guitar and vocals, and his younger brother Rory, on drums. They take their name from the Danish word for “boys”, although it is pronounced differently. source wikipedia

Plus, we have all of Britainâ€™s top 5 best-selling songs, and a look at who is topping the charts in Mexico.

BBC Top of the Pops is presented by KimRobson and available in Phuket on Phuket Island Radio online at PhuketradioÂ on a Saturday LIVE via Satelitte at 3pm and re run again on Sunday at 4pm. All times Thailand.

You can also listen by downloading the free mobile apps from Google Play and Iphone.