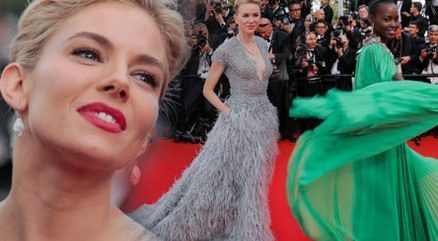 The Cannes Film Festival is back!

It’s that time of the year – the A-list’s most glamorous and best dressed are jetting into Cannes for the stunning film festival. Because if there’s one thing we’ve learned about this French film festival, it’s that fashion is just as important as the movies. The 68th Cannes Film Festival 2015 kicked off yesterday with a fittingly glamorous opening act.

Read on to see the feathered trains and sequined bodices that style stars like Charlize Theron, Sienna Miller, Karlie Kloss, Naomi Watts, and Julianne Moore are flaunting, and keep your eye out for their jaw-dropping accessories too. Because as every fashion girl knows, no outfit is complete without diamonds.

The first notable appearance of the festival came from Sienna Miller – who started as she means to go on decked out in Balenciaga for the event’s opening press conference.

Miranda Kerr cut a sensational figure in an outfit fit for a black-tie event as she rocked up to the press conference for the new Magnum Pink & Black ice cream on Thursday afternoon. The 32-year-old supermodel went all-out in a mid-length black skirt and matching top as she made her way to the press event, in order to launch the new flavors of the tasty treat brand.

The 2015 Best Actress Julianne Moore, Oscar winner wowed at the opening ceremony with an impressive, feathered, and textured dress exclusively by Giorgio Armani Prive, featuring a sleek silver skirt and plunging bodice. The forever classic beauty Natalie Portman showed up at the opening ceremony on May 13, in a strapless fire-engine red gown featuring a sweetheart bodice.

Apparently, Cannes Film Festival 2015 organizers have urged guests to desist from taking selfies during an event so it seems celebrities are getting their selfie-fill in on the pre-red carpet!

Stay in touch with us, and Alas! We will let you know tits and bits about Cannes Film Festival 2015!