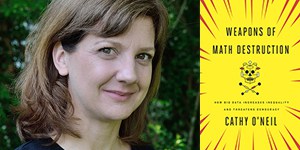 Our credit rating, our job prospects, our education, our spending habits, our justice system and our politics are all determined to some extent by algorithms. We can’t see them or negotiate with them and most of us don’t understand how they work, but behind the scenes, these mathematical models hold a huge amount of control over our lives and are altering the nature of our society.

With many proven examples of racist, sexist and prejudiced systems, Cathy O’Neil tells Click that it’s time to start worrying about algorithms. Weapons of Math Destruction will be broadcast by BBC Click Sunday 9th July at 09:30 Thai time and exclusive in Phuket to 91.5 & 102.5 FM Phuket Island Radio.

Phuket Island Radio is an authorised BBC Rebroadcaster and broadcasts as part of its EDU-tainment programming a number of Science, Health, Discovery, and Technology programmes every Sunday morning from 8 am. Please see the full schedule here

We live in the age of the algorithm. Increasingly, the decisions that affect our lives—where we go to school, whether we get a car loan, how much we pay for health insurance—are being made not by humans, but by mathematical models.

In theory, this should lead to greater fairness. Everyone is judged according to the same rules, and bias is eliminated.

But as Cathy O’Neil reveals in this urgent and necessary book, the opposite is true. The models being used today are opaque, unregulated, and uncontestable, even when they’re wrong. Most troubling, they reinforce discrimination. If a poor student can’t get a loan because a lending model deems him too risky (by virtue of his zip code), he’s then cut off from the kind of education that could pull him out of poverty, and a vicious spiral ensues.

Models are propping up the lucky and punishing the downtrodden, creating a “toxic cocktail for democracy.”

Welcome to the dark side of Big Data. See Cathy O’Neil book website and read the reviews

Also in this weeks edition of Click Oui Festival Paris: Dubbed the “TED meets Burning Man” conference for urban innovators and edgy entrepreneurs, this year’s OuiShare Fest will take place in Paris (5-7 July) and the theme is ‘Cities’.

OuiShare Fest Paris gathers 1,500 visionaries, entrepreneurs and movement builders to explore how digital technologies and a more collaborative culture can address the great challenges of our time.

Tenants in Barcelona have complained about rising rents from depleted housing stock as traditional landlords now favour the preferential financial rewards of renting to tourists via Airbnb. How did it come to this?

The gig economy promises to make entrepreneurs of us all, but encroaching on traditional services such as transport and accommodation, whilst leading initially to greater opportunities and competition, drives down wages and can bankrupt businesses, whilst lining the pockets of a few top executives.

But what if the ‘sharing’ collaborative technologies could be harvested for altruistic projects that make cities more attractive and collaborative places to live in? What social value can be created when you combine energy and real world assets with the organising power of digital platforms?

How can we convert the advantages of the growing ‘uberisation’ model of modern life for the many and not the few?

Click talks to Mara Balestrini and Helen Goulden who are participating in the festival.

Stay up to date with all our BBC Edutainment shows Healthcheck, Discovery, Science in Action and Digital Planet