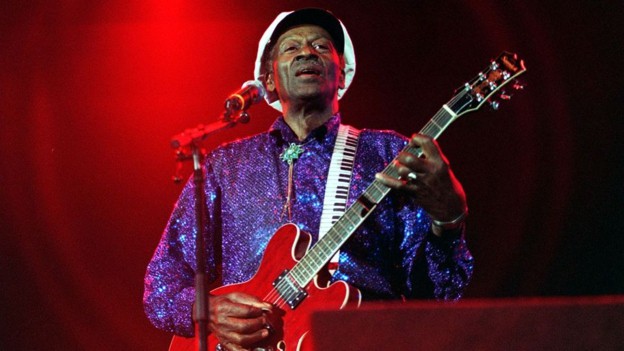 Last weekend the World heard the sad news that Chuck Berry had passed away with his family around him and aged 90.

Another great if not the greatest leaves our planet to make his music with many others who have left us.

Phuket Island Radio is delighted to announce they will broadcast on 91.5 and 102.5 FM throughout Phuket and at the same time online via internet streaming and its downloadable mobile apps a special program dedicated to a music icon who was one of the early pioneers of rock ‘n’ roll – Chuck Berry.

Containing exclusive BBC interviews, Chuck Berry recounts his childhood upbringing; how his parents instilled in him the power of poetry by often reciting verses aloud at home, his early musical influences – especially blues music and the important lessons he learned from his musical idols like Muddy Waters.

We hear about his first hit with Chess Records, Maybelline which tapped into a new zeitgeist – the youthful energy of an unsettled generation.

Many hits followed including Roll Over Beethoven, School Days, Sweet Little Sixteen, and Johnny B Goode.

There was also his signature dance, the duckwalk which the crowds loved.

His influence on a new generation of music artists cannot be underestimated.

His skepticism of the music industry paved the way for African-American artists setting up their own labels and his original style of lyrical versatility and guitar twangs have changed popular music forever.

Direct from the BBC and presented by Mark Coles