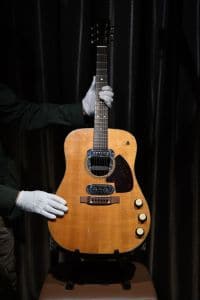 The previous record was $3.95 million for a Black Stratocaster owned by Pink Floyd’s David Gilmour.

Pre-auction bids on the 1959 Martin D-18E, purchased by the Nirvana singer at Los Angeles’ Voltage Guitars and modified for the left-handed Cobain, reached $1 million even before bidding officially opened Saturday.

The guitar received seven bids total, including the winning bid of $6,010,00, the Julien’s Auctions website stated.

The guitar also came with its original hard-shell case that Cobain had adorned with a flyer for the band Poison Idea’s 1990 album Feel the Darkness. Inside the case is a half-used pack of Martin guitar strings, three picks, and a “suede ‘stash’ bag” that’s decorated with a small silver spoon, fork, and knife.

“This important guitar has earned its rightful place in rock & roll history as the instrument played by one of rock’s most influential musicians and icons in one of the greatest and most memorable live performances of all time,” Darren Julien, president and CEO of the auction house, previously said in a statement.

Other Nirvana’s MTV Unplugged performance items included in the Julien’s Auctions lot included Curt Kirkwood’s handwritten lyric sheet to the Meat Puppets’ “Oh, Me,” a typed setlist from the legendary gig, typed-out lyrics for David Bowie’s “The Man Who Sold the World” and Meat Puppets’ “Lake of Fire,” and a letter to Cobain from Nirvana’s management company nine days before the Unplugged performance outlining potential songs for the gig.

In October 2019, Cobain’s green cardigan from the Unplugged performance sold at Julien’s Auctions for $334,000, making it the most expensive sweater ever purchased at auction.

Did you read about Duane Allman’s Guitar?