ONE Championship is rising in popularity and is becoming one of the most sought-after sports events in the southeast, if not in the entire Asian region.

While the first-ever ONE Championship event was held way back on September 3, 2011, it is only now that it has gone mainstream in Asia.

ONE Championship is a mixed-martial-arts (MMA) sporting event/promotion that is based in Singapore. For those who have seen UFC, ONE is basically the same game, except that the latter is only set on the Asian market.

ONE showcases Asian fighters like Yoshiyuki Yoshia(Japan), Wei Bin Li(China), Shinya Aoki (Japan), and Eduard Folayang (Philippines). But with its rapid growth, it has also attracted a number of foreign fighters to join the promotion.

MMA is already big in the US and even in Europe. It is somewhat ironic though that Asia has only recently recognized the sport considering it has some of the biggest names in martial art (i.e. Bruce Lee, Jackie Chan, Jet Li). Martial art is also known to have originated in Asia.

The growth of MMA is inversely proportional to that of Boxing. In recent years, boxing has experienced a decline in popularity to the extent that some sports enthusiasts and ‘experts’ deemed it is already a dead sport. But on a global scale, boxing is still way bigger than MMA.

Boxing’s Fight of the Century also didn’t really live up to everybody’s expectations. A lot of boxing fans that have long waited for the supposedly exciting fight felt let down.

The more aggressive Manny Pacquioa, who by the way is a ONE Championship shareholder, fell short to the defense genius Floyd Mayweather Jr.

If you’re looking for exciting and heart-stopping fights though, you can find it in MMA. MMA is basically a combat sport that allows full-contact techniques including striking and grappling. Fights are also conducted while standing and on the ground.

The Asian promotion still has a long way to go in order to dominate the global market. UFC is still by far the larger MMA promotion with a presence in 150 countries and with over 300 events to date and counting. ONE on the other hand has only featured 27 events.

On a side note, there are former UFC fighters that have a switch to ONE. The most notable fighter to switch from UFC to ONE is Brandon Vera. Vera signed a deal with ONE Championship in July 2014. His debut fight was with Igor Subora on December 5, 2014, which he won via knockout.

This only goes to show that ONE has great potentials to draw interest to sports fans worldwide. And according to ONE Championship CEO Victory Cui, the promotion has gotten a lot of sponsorships offers. Unfortunately, the Singaporean company already has plenty of sponsorship deals with other companies.

“We’ve gotten a lot of interest. Because now sponsors are looking for other opportunities.This was just another reason for them to look at Asia. Unfortunately we’re turning down sponsors now. “

Watch the latest ONE Championship event 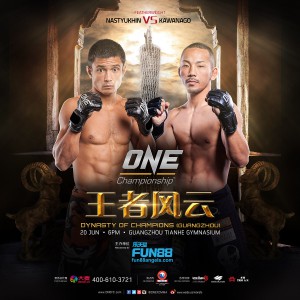 The next ONE Championship event will be held in Guangzhou, China this coming June 20th, 2015.

The event is dubbed as ONE Championship: Dynasty of Champions featuring a fight between Nastyukjin and Kawanago.

Expect exciting and action-packed fight cards! Tune in to Phuket Island Radio on 91.5 and 102.5FM in Phuket and around the world via FREE to download apps and radio portals, for all the latest updates of the upcoming ONE event.