Surfs up and high tide Phuket, but before we venture out into the surf, shouldn’t we understand a bit about the Phuket Tides, the weather and sea conditions?

Thais have embraced the sport as it fits their laid-back lifestyle. Regulars in the water are now a mixture of local Thais and foreigners from the sizeable ex-pat community.

The ‘Land Of Smiles’ should not be rated as a mainstream surfing destination, but a fun surf in uncrowded and friendly conditions is definitely on the cards.

Join our series and learn.

This article will help you learn a little about reading a Phuket Tide Table and will focus on some of the most popular surfing areas around the Island.

How To Read Tide Tables

It is a fact that the beaches of Phuket are widely coveted among the best surf destinations in Thailand.

Surfers regularly flock to Kalim and Patong Beach, Kamala Beach, Kata Beach, Nai Ham Beach, and Surin Beach, among others, especially during the summer season between April and October, where the surfs up, and conditions are at their most ideal.

To make the most of Phuket’s fantastic surf, you’ll need to learn how to read tide tables. These tables are widely available to view online or inside most surf shops on Phuket’s coast. They contain vital information that will reveal the best time of day to hit the waves. Here is the key information to seek out.

There are two “high tides” and “low tides” per day in Phuket.

Where the sea is closest to the shore, although the perfect surf conditions will also depend on other conditions, it’s typically accepted that extreme high tides produce poor waves that break more onto themselves rather than from top to bottom. 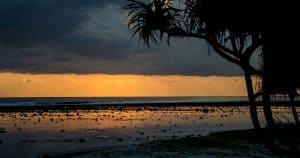 When the sea is furthest from the shore, it tends to suck the life out of waves altogether.

During this time, you’ll also have to deal with rocks or kelp interfering with your board.

A safe bet for Phuket’s beaches is to surf after low tide, as the tide is coming in towards the shore.

The forward momentum of the waves at this time tends to create better surfing conditions.

Some tide tables will forecast the average size and direction of the waves.

This is often known as the swell. The swell size is the expected distance between the crest and trough of a wave. The swell direction may be symbolised by a letter (N for the north, W for the west etc.). Some detailed reports will also estimate intervals between waves in seconds.

It’s important to consider when high, and low tide will be and what the actual water depth will be at those points. After all, waves only tend to break on a shallow coastline, where the water is roughly half as deep as the wave is tall.

The best way to judge ideal surf conditions is to test the waters for yourself. See if the surf is up. After all, the perfect time to hit the waves will differ depending on the weather and your location.

When you discover some fantastic conditions at a particular Phuket beach, make a note of the swell and position of the tide. This will help you make smarter decisions for choosing the best tide again in the future.

That’s not to say these conditions will always appear at the same time of day. The speed and depth of the tide tend to differ throughout lunar cycles. Ah yes, the Lunar cycle? There’s little difference between high and low tide during the first and last quarter of the moon’s cycle. During other times, there is significant variance. We will cover Spring Tides and neap tides in another article.

So, are tide tables useful? With the help of these documents, you can calculate the best time of day to surf in Phuket. Enjoy your days on the water and stay safe.

You can check out the monthly/daily/hourly Phuket Tide Tables HERE, and the Latest Phuket Weather and Phuket Radar are HERE.