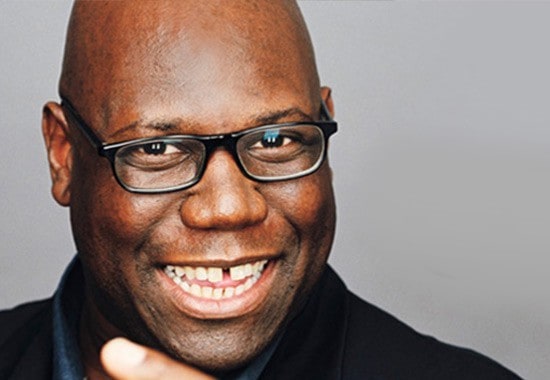 Carl began his career as a hardcore and rave DJ in the mid-1980’s.

a veteran of acid house and a champion of techno

Born in the North West of the UK in Oldham in July 1962, he played his first gig in Hackney, London with legendary promoter John Binton. Unconfirmed reports suggest he was coerced into eating an onion while playing, he left this gig with the name ‘Three Deck Wizard’.

Carl Cox has been part of the UK and global dance scene for over four decades, his testament to his success and mixing skills is that he is, without a doubt, a champion of techno, the love of his work is infectious.

Carl’s 1991 debut single for Perfecto records owner Paul Oakenfold gave him a Top 30 hit and an appearance on Top of the Pops.

“Techno drives home somewhere,” he says of his core music. “It takes you to an element of surprise, not knowing where you’re going. It’s scary but wonderful at the same time.”

So many classic releases, including his 1995 mix CD, ‘F.A.C.T,’ which became a techno benchmark, selling over 250,000 copies – no easy feat in 1995. His 1996 EP ‘Two Paintings and a Drum,’ again broke the British Top 30. Carl was a reluctant pop star, as trance attracted the masses and hardcore jungle was created, Carl Cox retreated into the club world, and embraced the underground sounds of techno.

Moving through this esteemed career to now,  Carl Cox continues to break records with his weekly radio show Global featured here on Phuket Island Radio and now listened to by over 60 FM Radio and satellite stations through 35 countries capturing over 12 million listeners every week. Carl Cox is very much out there playing regularly during the ‘Ibiza Season’ and travelling globally throughout the year, Festivals, Clubs, events are all part of the Carl Cox production.

“the story still continues in a massive way – there’s so much more still to come.” says Carl

You can catch Carl Cox Global each and every Wednesday right here on 91.5 and 102.5 FM from 10pm. Or you can download from the IStore the apps and Google Play if you’re using an Android device, by the way, the apps are FREE.

Phuket Island radio brings you the biggest and best DJ’s with some of the most popular shows in the world, check them out .