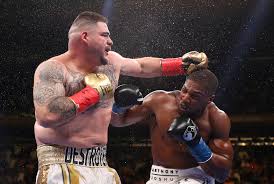 A round up of the latest boxing news with Talk Sport and from around the world with image credits to Getty Images.UPDATE: Andy Ruiz Jr will defend his unified heavyweight titles in a rematch.   Dethroned former champion Anthony Joshua will meet Andy Ruiz Jr on December 7 in Diriyah, Saudi Arabia.

After Joshua told Sky: “I’d fight in Tijuana and Ruiz’s uncle could be the referee and I would still whoop him.”

Ruiz replied: “AJ says he can ‘whoop’ me in Tijuana? Prove it. Let’s run it in Mexico.

“Remember that you did have a huge reason to come to America and that was to build your profile.”

Warrington will make another hometown defence of his IBF featherweight title when he takes on Sofiane Takoucht on October 12.

He said: “From what I’ve seen, Takoucht is tough and got his IBF ranking through hard work.

“This is a massive opportunity for him. I have to stay focused and not take my eye off the ball because I am after the biggest fights in the division.”

Saunders has fired straight back at Eubank Jr after hearing that his old foe branded him a ‘lowlife’.

In response, BJS took to social media and replied by posting two images of their 2014 bout.

He captioned them: “Don’t try and use me as publicity, you bum.

“We all know what happened last time, you no good bum.

Frampton has hinted that his next fight might just be his last after a bizarre injury ruled him out of a bout this weekend.

“I want to go out in a f***ing blaze of glory here. I want to be a world champion again.

“If I get offered a shot against any world champion, featherweight or super-featherweight, I’m taking it.”

When asked for his thoughts on whether the underdog can prevail a second time, Tyson told ESPN Deportes: “He can do it.

The Rest of the Sport round up.