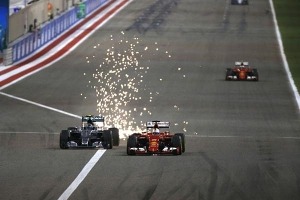 Lewis Hamilton appeared to be in full control of the 2015 Bahrain GP from the start.

Some might say Hamilton was in control all weekend at the Bahrain GP.

Leading from pole position in the desert night lights of the Sakhir circuit he was in charge with Rosberg driving in his 100th Mercedes GP. Was he going to try to prove himself?

Rosberg, started 3rd on the grid and was dropped to 4th at the start however he soon set about the Ferrari’s, overtaking Raikkonen after 4 laps and disposing of Vettel after another four laps.

Hamilton still in control, built his lead into the Bahrain GP second pit stop, the Mercedes team stopping him before Rosberg to ensure there was no threat from behind.

At the end of the race Hamilton was to say:

The Ferraris gave us a real good run for our money and out there it was really difficult to look after the tyres in these conditions, behind backmarkers and all sorts, but fortunately I was able to keep the car together, keep the tyres as healthy as possible and pull it through.

Rosberg had his work cut out after the final stop as Raikkonen emerged on the faster soft tyre and just 15 seconds behind Rosberg with 17 laps to go.

They entered the penultimate lap with Raikkonen just one send behind, when a partial brake failure caused Rosberg to run wide and Kimi was through and into 2nd on the podium.

I couldn’t catch him (Hamilton) and he even pulled away at the end a little bit, and then I lost my brakes unfortunately, two laps from the end. I just went straight on and that cost me the position to Kimi, which is very disappointing.

The problem was caused by overheating, which caused a failure of the brake-by-wire system, and that Rosberg was helpless. The same problem affected Hamilton at the same time.

You can follow all the F1 fun and games on Phuket Island Radio and the Twitter account, we will be back in May when we go to the Spanish Grand Prix, in Barcelona, Catalunya on the 8th May.