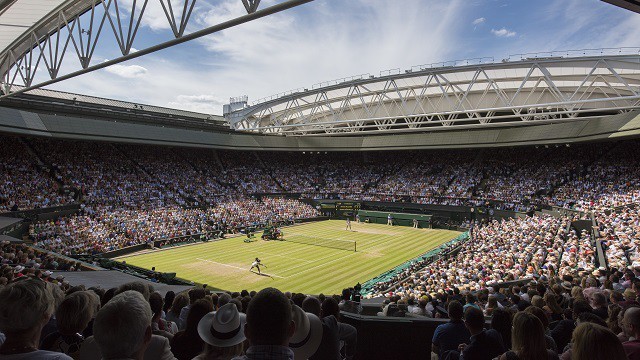 The world’s greatest tennis championships return to Wimbledon and the courts of the All England Club in London. Home favourite Andy Murray defends his Men’s Singles title, while Serena Williams’ absence opens up opportunities for her rivals in the Women’s Singles. We bring you the best action, analysis and interviews in Today at Wimbledon and Wimbledon Update throughout the 2017 Championships.

Andy Murray and the seeds at the Wimbledon Tennis Championships.

Andy Murray will begin the defence of his Wimbledon title against a qualifier after the draw was made at the All England Club on Friday.

Murray’s first-round opponent will be lucky loser Sasha Bublik – a  20-year-old Russian, ranked No. 134, who has only ever won a single  main-draw match at a grand slam before.  Meanwhile the unlikely British qualifier Alex Ward will face compatriot  Kyle Edmund in the first round. Reports the UK Daily Telegraph here

We will bring you more on Andy’s fitness through the weekend.

Available all day Wimbledon is the oldest tennis tournament in the world and widely considered the most prestigious.

It has been held at the All England Club in Wimbledon, southwest London since 1877. It is the only one of the four Grand Slam events to be played on grass.

In BBC Wimbledon Update Chris Dennis presents a daily five-minute round-up of all the action.

Available throughout the day right here on Phuket Island Radio 91.5 and 102.5FM

]The 2017 Wimbledon Championships are a Grand Slam tennis tournament which is due to take place at All England Lawn Tennis and Croquet Club in Wimbledon, London, United Kingdom. The main draw matches commence on 3 July 2017 and conclude on 16 July 2017.

The 2017 tournament is the 131st edition of the championships, the 50th in the Open Era and the third Grand Slam tournament of the year. It is to be played on grass courts and was part of the ATP World Tour, the WTA Tour, the ITF Junior tour and the NEC Tour. The tournament is organised by All England Lawn Tennis Club and International Tennis Federation.

Andy Murray is the defending champion in the Gentlemen’s singles. Two-time defending Ladies’ singles champion Serena Williams will not return to defend her title, having ended her season in April due to pregnancy.