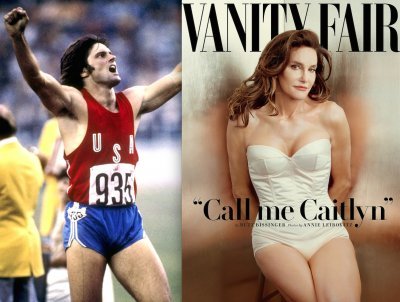 Caitlyn Jenner, the Olympian is formerly known as Bruce Jenner, made her debut on the cover of Vanity Fair Magazine on Monday, after announcing she is transgender in an interview with ABC’s Diane Sawyer.

Caitlyn Jenner says “For all intents and purposes, I’m a woman. People look at me differently. They see me as this macho male, but my heart and my soul and everything that I do in life — it is part of me,” Jenner added. “That female side is part of me. That’s who I am … My brain is much more female than it is male,” he added. “It’s hard for people to understand that, but that’s what my soul is.”

So Olympian Bruce Jenner formally bid farewell to his male identity by introducing the world to Caitlyn Jenner.

This woman revealed her new identity as Caitlyn Jenner on the cover of Vanity Fair. The photograph of Ms Jenner in a corset was shot by Annie Leibovitz along with the headline ‘Call Me Caitlyn,’ instantly became a sensation on social media when the magazine posted the picture online.

Ms.Bruce Jenner, who won an Olympic medal in the decathlon, was very popular amongst the public. As Bruce, she had been on the cover picture of the magazine Playgirl. She is an actor and an author and lately has been a part of the popular Kardashian family’s show. Caitlyn Jenner did not spell her first name with a “K” because she wants a clean break from the Kardashian moniker. In early 2015, reports emerged that Jenner was in the process of becoming a lady.

According to some popular website, “Caitlyn speaks sadly about her journey, telling the author Buzz Bissinger

‘If I was lying on my deathbed and I had kept this secret and never ever did anything about it, I would be lying there saying, “You just blew your entire life.” ‘ “

The popular photographer Annie Leibovitz shot the first image of Jenner in her Malibu home for the forthcoming magazine issue. The pictures also accompanied an article written by Buzz Bissinger.

Well, upon posting her first Tweet, the Olympian gold medalist broke the Twitter Guinness-certified record, earlier held by President Barack Obama, by attaining over a billion followers in a mere 4 hours.

It took Obama 5 hours to reach a million followers but he has no hard feelings, as the @BarackObama account, which is run by Obama for America, tweeted support for Jenner and hailed her bravery for sharing her story with the world.

Indeed, most cover stories about this woman generally include Jenner’s long, brunette locks and white satin corset. But, then, I guess, what else is new when it comes to media representations of ladies.

It’s all about her attire and how good her skin appears, isn’t it?

Jenner’s transformation coming out is a victory for various individuals, including herself, and we should be proud of the woman she is!