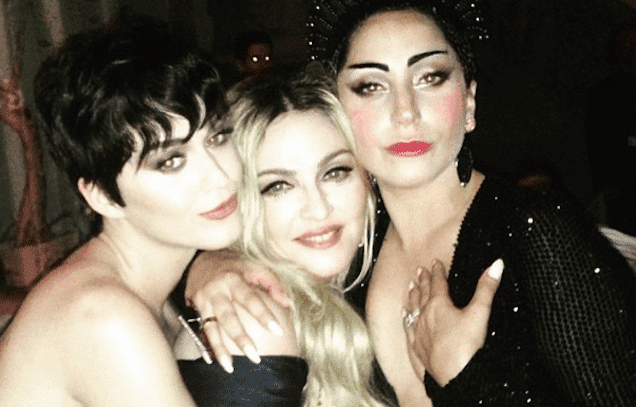 Can You Believe? Madonna, Lady Gaga & Katy Perry Cuddled at the Met Gala!

The 2015 Met Gala saw various Hollywood celebrities walking on the red carpet in their finest clothing. Some of them looked elegant and a few of them were half-naked! This year at the Met Gala stars posed on the red carpet wearing a lot of sheer and see-through fabrics leaving nothing for one’s imagination.

“Hold your breath as this is one of the most daring red carpet events you will witness in your entire life”.

Hollywood celebrities like Madonna, Katy Perry, and Lady Gaga were amongst the famous celebrities who gathered in the Metropolitan Museum of Art in New York City to attend the Met Gala 2015.

It sounds like the beginning of a joke but the 3 sometimes-foes all got together for a glam picture during Monday night’s events. Madonna shared the picture which seems to be taken after few hours after partying — on her social media platform i.e. Instagram, along with the amazing caption, “Girls night out………. Kissing the Ring……..Finally! #metball”
She was likely referring to Lady Gaga’s stunning engagement ring from Tyler Kinney, her fiance. Katy Perry also posted an image on Twitter, along with the hashtag quoted “#breaktheinternet2k15.”

The amazing photo appears to be evidence that the three big personalities of pop have put their differences behind them in the name of fashion.

Lady Gaga and Madonna have had a famously cold relationship since the “Papa Don’t Preach” singer branded Lady Gaga’s song “Born This Way” a “reductive” rip-off of her own hit song “Express Yourself.”

Perry and Gaga have likewise been caught up in various feud situations. Though both have publicly denied any actual ill feelings against each other Twitter messages (such as the one Lady Gaga posted seemingly calling Perry out for copying her green hair and in-concert horse riding in May last year) report something else only!

But while the trio diva fans struggled to make sense of the unexpected moment of togetherness (and freaked out in a huge way over Katy Perry’s suggestion they were teaming up for a single) the 3 members of pop royalty just enjoyed the stir they created!

The Moschino-colored gown on Katy Perry seemed out of this world. The singer enhanced her look with heavy makeup and a matching pair of gloves. We also love her Athens space hairdo!

The “Bad Romance” songstress paired her black hair with a black studded headpiece and wore black sharp eyebrows. She sported a head-to-toe Balenciaga ensemble covered in 14,000 sheared feathers and rhinestones.

Some couples who made their first appearance at Met Gala included George Clooney and his wife Amal, Robert Pattinson and FKA twigs, as well as Joe Manganiello and Sofia Vergara.

Read more on this event here and here