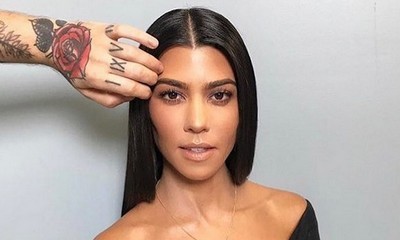 So the Kourtney Kardashian family is back in the news this weekend as Ace Showbiz reports on her latest escapades.

The ‘Keeping Up with the Kardashians’ star ditches her bra while leaving a studio in Los Angeles with a male pal.

Kourtney Kardashian ditched her bra during an outing in Los Angeles on Friday, June 30. The “Keeping Up with the Kardashians” star donned a very revealing top while leaving a studio with a male pal.

Kourtney wore an off-the-shoulder black top, a pair of baggy wide-leg pants, which featured silver button detailing down the sides, and sneakers. She carried a small backpack and her hair was straightened.

Later in the day, the eldest daughter of Kris Jenner and Robert Kardashian shared on Instagram a photo of her wearing the same revealing outfit. She donned smokey-eyed makeup and nude lips. “The hand is back,” she captioned the snap.

the hand is back 🌹

During the outing, Kourtney was spotted hugging her handsome male friend in the parking lot. It appeared they were filming “KUWTK” at the time.