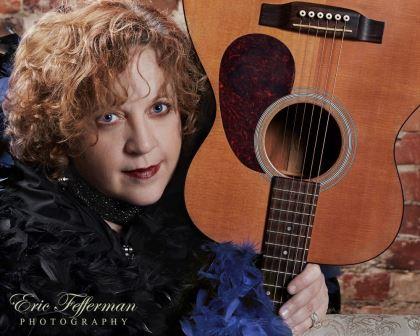 Kim Doolittle, the singer, songwriter met with New Music host Allen Bell recently, and here’s what she had to say.

I am from Nova Scotia Canada, the Maritimes and I have been a musician forever. I play 4 instruments, write all my own songs, try and tell cool stories relating to the music and give people a chuckle whenever possible.

What triggered Kim Doolittle to do music and work with this genre?

I was born a musician. Mom told me I was singing before I was speaking. By the time I was 10 I was fronting a band and was with them till 17, I graduated school and made my way on a walkabout through Canada and found myself in Toronto where I joined a band intending to be a fill-in singer and 7 years went by.

In that time, I really resonated with the blues and all that went with it, gospel, country, and folk blues and they have melded into the sound that is mine or what I would call Kim Doolittle Music. Having a big voice pretty much sealed the deal.

Walk us through your creative process?

I write while I drive, which is a LOT, and sing into my phone (hands-free of course, lol). Seriously, melodies go through my head and I sing them and then scratch them out. If I get stuck and can’t move forward with a song, I co-write and I find this leads to stronger music. I am struck when I least expected. I have been inspired while out to dinner, biking, on the treadmill, swimming, I just never know when an idea is going to filter in.

My only ritual is to be spontaneous and to write 3 pages a morning in a journal (as per the artist way) and take myself away from computers so my brain can actually think without automation.

John Hiatt. I love his writing because it is bluesy and very visual. Bonnie Raitt of course because she is just incredible and I have been a fan forever.

Which track of yours do your fans HAVE TO listen to (what is your favorite track) and why?

It is a toss-up between Memphis Moon (a song written in Memphis when my band had ended and I was deciding that I had to seriously just follow my own muse and entirely promote myself and what I had to say), the other is Let The River Run, (a song about growing up in the country and how the Annapolis River which winds through the Valley became a metaphor for time passing although very little really changes despite it, the flow of life).

Phuket Island Radio is happy to be supporting so many new artists through its Sunday evening show NEW MUSIC. Take a look at some of the other bios and interviews the show host Alan Bell has recently conducted.

Find out more about how Phuket Island is doing