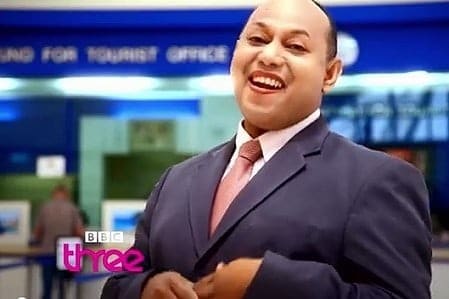 Welcome to the Airport of Smiles Bangkok Airport is how the trailer starts for the BBC’s latest factual program set in Thailand. This one is called “Bangkok Airport” and consists of six, sixty-minute episodes.

Pre-production on Bangkok Airport was done in Thailand at the end of 2013. The camera crew then arrived at Suvarnabhumi Airport in January 2014 and stayed there for about three months.

Most of the series is based at the airport but they did apparently follow some of the tourists on their holiday. This period was the height of the protests in Bangkok. The above flyer was sent out on Twitter by one of the assistant producers who was looking for people to be featured in the TV show.

Bangkok airport, the gateway to South-East Asia, is a thriving, bustling hub of excitement and anticipation, of pale arrivals to tanned departures and everything in between.

BBC Three has gained unparalleled access to all aspects of the airport in this thrilling six-part series which sees young Brits passing through to embark on adventures of a lifetime. Each episode follows some of the thousands of youth British travellers checking in and checking out, run-ins with the tourist police, incidents in immigration, customs, treatment at the on-site medical centre, missed flights, expired passports, and emergencies abroad.

The action takes place inside and occasionally outside the airport, at island trouble spots and the British Embassy in downtown Bangkok.