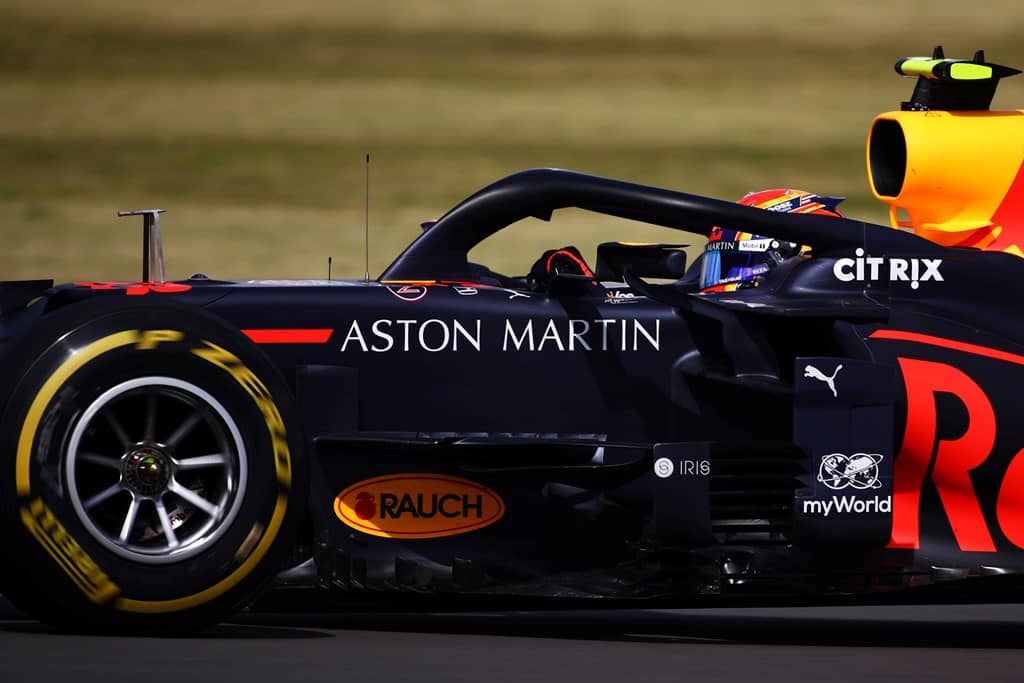 Thai driver, Alex Albon 2020 season has indeed started. Alex is the first Thai driver to compete in Formula One since 1954

The 2020 Formula 1 championship has started in Austria on the 3rd – 5th July.

Like every sport, F1 has had to delay its events due to Covid-19. This month the season kicks of with racing in Austria for two weekends in a row. With the first weekend out of the way scroll down and read our views.

Few drivers will be as excited to get started as Albon. After only six months last year, Albon drove impressively enough to receive a promotion to one of the top teams – Red Bull Racing. That move was predicted right here on Phuket Radio. We also predicted MAYBE a F1 Thailand race will be in future Thai government plans? Our view this is still a possibility as Thailand moves to a new normal post the Covid 19 pandemic.

Why is that Alex cannot seem to qualify any higher?

Once again this weekend we seem him 9th on the grid, yes he finished a credible 5th overall and is 6th in the Driver’s Championship.

However, there’s something not coming together for this young Anglo/Thai driver.

He consistently has had to fight his way through the field, and seems to be making hard work of putting the qualifying lap together.

Yet again on Lap 42 he places the fastest lap?

He pitted at lap 9 and found himself at the back, so a lot of work to do.

Red Bull Racing is a very competitive team and it is our opinion that he could find himself in a seat switch with Gasly if he doesn’t find those extra seconds at qualifying.

Alex also put in another very strong race today with some great passes, particularly around the outside of Copse as he progressed through the field decisively to finish a very competitive fifth place.

Meanwhile at Red Bull, Verstappen dismantled Ricciardo’s replacement last year, Pierre Gasly, to the point that Red Bull demoted him back to the junior team, Toro Rosso, halfway through the year.

Gasly was on average over 0.5secs a lap slower than Verstappen, and was lapped by his team-mate twice in the 12 races they had together at Red Bull.

So in came Alex Albon, a highly promising young British-Thai driver, but the result at Red Bull has barely changed.

Verstappen still enjoys a 0.4secs qualifying advantage against Albon on average, and is constantly a thorn in the side of Mercedes, while Albon is usually left fighting with the midfielders to get into the top four or five.

So, next week Teams return to Circuit de Barcelona-Catalunya for another weekend of action.
Sat, Aug 15 – Qualifying
Sun, Aug 16 – Race

Silverstone in the UK is the home of motor racing to many and maybe after this weekend Alex was wishing it was not.

After a big crash in Practice on Friday and then not a particular good qualifying session on Saturday he found himself 12th on Sunday’s grid.

Could this weekend get any worse for the Alex Albon 2020 season?

Lap 1 and a tangle with Haas driver Kevin Magnussen which eventually led to a 5 second penalty after a safety car, the first of the race. Many thought this was in fact a racing incident, but hey ho, the racing stewards decided otherwise.

Safety car came in and Alex reported a vibration which meant a pit stop on lap 7 and return to the track at the back.

Another safety car incident and after 18 laps we had only raced 6 laps.

Lap 31 and in for tyre change and to serve a 5 second penalty.

With over have the distance completed and a new set of tyres there was a lot of work to do to get up and into the points.

The final 2 laps saw a lot of change with both Mercedes front runners suffering from tyre issues, Bottas dropping out of the points with his puncture and Hamilton running half a lap with a front left puncture. Meanwhile. Alex’s team mate Max Verstappen having pitted on lap 50 to go for the fastest lap finished just 6 seconds behind Hamilton.

With so many of the front runners suffering from tyre issues including Russell, Vettel and Stroll, Alex was able to overall them and finished 8th collecting 4 points.

“Eighth isn’t what I want but it’s damage limitation after the damage to the car and penalty at the start of the race. I think the incident with Kevin was 50/50, he made a mistake and left a gap so I went for the move.

When I realised he didn’t see me and he closed the door I tried to get out of the way but we touched. There was a big difference of speed going into the corner and it couldn’t be avoided.

We had a lot of work to do this weekend but we did the best we could and the race pace was okay fighting back through the field. I’m happy we’ve got another race here at Silverstone next weekend as I love this track and we can use what we’ve learned this week and put it into practice.”

Unfortunately, he also lost the fastest lap point to his team mate. Now, had Max not gone for it he probably would have passed Hamilton and won.

Hey ho that’s racing and Alex now sits with 26 points in the drivers championship and 6th in the standings.

ALEX ALBON, Finish Position: 5th, Start Position: 13th
“It was a good race and I had a lot of fun with my elbows out. If you had told me we’d be P5 after yesterday I would have jumped at it. Today was never going to be easy starting from P13 but we had a good start and we made our way through the field. It’s not easy to overtake at this circuit so we had to do some big moves to get past people. Read the full Red Bull Racing Race report.

Lots more pictures of Alex’s 2020 season here. Now, A week off and then it’s two full weekend in the UK, Silverstone here we come.

Well done to Alex after an horrendously wet conditions for qualifying on Saturday we found ourselves in 6th position on the grid.

The big mystery being what tyres was every one on, due to the official wet qualifying. All was soon discovered as the covers came off reveling the top 7 all on soft compound.

Lap 8 we saw Alex move up to 4th where he was to stay until 15 laps to go as Perez was on charge and started to come into the DRS zone in 5th place.

In second place team mate Max was having issues with debris on his front wing and was to eventual drop to third.  Meanwhile Alex Albon 2020 season was nearly brought to another halt in a racing incident with Perez. Remember last week with Hamilton, only this time Perez came worst off after touching the Red Bull of Albon.

The Mexican made a bid for the position with just two laps to go but came to grief as he tried to pass at Turn Four in a mirror of the collision between Hamilton and Albon at the same place last week.

Alex Albon 2020 season is intact has he scores 12  points and 8th in the driver standings.

Next weekend to the Hungarian Grand Prix

Oh my goodness Alex Albon 2020 season gets under way with an excellent qualify session and great start. Then, WHAT, another indecent with Lewis Hamilton, again stopping Alex getting is inaugural podium.

How, must he have felt when Hamilton stayed wide causing Alex to flip around and boom, we could hear his heart sink in Phuket.

Could Alex Albon 2020 season have been an outstanding start and maybe with both Mercedes struggling he could have won, but certainly seen himself on his first F1 Podium.

Albon said: “I am a bit depressed right now so I have to be careful what I say. I really felt like I could have won the race. Mercedes had the outright pace but the guys did a great job with the strategy.

“There is always the risk of overtaking on the outside but I gave it as much space as I could. I was right on the edge, if I gave him all the space I could give him, it is up to him if he wants to crash or not.”

Hamilton of course said said he felt it was a “racing incident”.

So we move to the Austrian GP version two this weekend and wish Alex much much better luck.  We have started to compile an Alex Albon 2020 Season picture gallery here

Now, not only is Alex Albon the only Asian driver in Formula 1 for the second year running, but he also has a fantastic opportunity to win a race in this 2020 season. There is a gap in performance between the ten teams in the sport. Unlike in 2019 where he started at a junior outfit, Albon will enjoy a full season in a car that is capable of winning races.

Will we see the Thai flag on a podium this year?

It’s not unlikely. Alex Albon proved he had the speed to succeed last year, even with his limited F1 experience. At the race in Brazil, Albon was on course to clinch Thailand’s first podium in Formula 1, before another driver crashed into him. Aside from that, he never finished lower than 6th place in every other race for Aston Martin Red Bull Racing.

Red Bull racing are set and Alex Albon 2020 in car number 23 the RB 16 i definitely  one to watch. Powered by the Honda developed 6 cylinder, 1600 cc engine producing 900 BHP is a winning machine.

Are you a Alex Albon SUPER fan? Check out this quiz and discover how much you know about Alex.

So far, seven countries have cancelled their 2020 F1 race events including Singapore and Japan.

The announced schedule currently only has European venues, with the governing body due to unveil further circuits shortly. To help prevent the spread of the virus, no fans can attend, and regular testing for team personnel will be in place.

The season may be different from any Formula 1 has seen before, but for Alex Albon 2020 might be the year he shows the world just how good a driver he is.

Off the grid, Sebastian Vettel to race for Aston Martin Racing Point, read the full story.