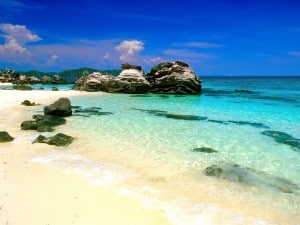 The Phuket Weather at Christmas can be unpredictable. Phuket, located South of Bangkok, Thailand’s capital, has been a choice tourist destination for many years, experiences two distinct seasons.  A tropical monsoon rainy season and a short dry season.

The Monsoon rainy season begins in April through to October. The highest rainfall usually occurs in the months of May, September, and October during which it can rain for long periods. During the months of June, July, and August months, rain usually falls in short heavy bursts. In between, the weather is pleasant with comfortable temperatures and a cooling breeze. There will often be periods of several days without any rain.

December falls within the dry season that starts in November and ends in March. There may be an occasional shower or a few heavy downpours but generally, it is dry.

Tourist activities usually start in late November reaching their peak in January. During this period, the weather is not so humid and the cool breezes keep things comfortable. The average temperature hovers around 24C/75F and 32C/89F.

This makes Phuket an ideal Christmas destination as it offers an ideal holiday destination devoid of snow, frosts, and rain.

However, it is important to note that as with most parts of the world, weather is generally unpredictable. Christmas in Phuket For example, in 2005 and 2010 it rained all the way through to Christmas and the New Year.

Phuket was one of the worst-hit places during the Boxing Day Tsunami of 2014. After this event, the Indian Ocean Tsunami Warning System was constructed and has been operational since 2006. Early warning of possible weather changes has been in place since then.

The table below gives a summary of weather indices for a typical December in Phuket.

The month of December is characterized by essentially constant daily high temperatures, with daily highs around 31°C throughout the month, exceeding 34°C or dropping below 29°C only one day in ten.

A fraction of Time Spent in Various Temperature Bands in December

There are daily and monthly updates, along with Windguru Phuket charts, Live Phuket Air Quality data, and live wind direction and strength information.